Is it waffles for breakfast or cake for dessert???  You decide with this versatile recipe.  The first morning I made these, they were great along side of some breakfast sausage and homemade strawberry- balsamic preserves.  My husband the said the waffles, were by far, the best yet.  The next day, I put the rest in the toaster and decided to try them with a bit of Whipped Coconut Milk (you have to try this… It really works… Use Thai Kitchen Brand).  I whipped the coconut milk and added a bit of vanilla and stevia and put it on the warm waffles and served it with sliced strawberries (with a splash of balsamic vinegar and stevia).  Strawberry Short Cake anyone?!  I was so impressed how well it held up as a cake.  My husband says he doesn’t like coconut but he couldn’t even tell the whipped “cream” was coconut milk! I was impressed! :=)

I am trying to increase the amount of coconut products and lessen the amount of dairy that I use, particularly if another form of “milk” can be used with the same results.  The next batch I made, I only used coconut milk and used coconut oil instead of butter.   They were divine!  The slight coconut taste was very nice with the strawberries.

You can also make into pancakes.  I find that using small waffle makers speeds up the time it takes to prepare but pretty soon (next week when we officially move), I will probably be doing lots of pancakes on the griddle on my stove! 😉

Make a few batches of these while you are messing up the blender and throw the extra ones in the refrigerator and pot them in the toaster.  I honestly think they are better the next day!

“...no one is born a great cook, one learns by doing.” ~ Julia Child
Melissa is the mother of 2 beautiful boys and the creator of the Satisfying Eats Blog. She has also authored two cookbooks, Satisfying Eats and Comforting Eats, out of her love for Southern food but with a grain-free twist.

From an early age, Melissa has always loved to cook, and after going grain-free almost three years ago, she has had to relearn everything she thought she knew about great cooking so that she could continue to create delicious recipes. Creating tasty Grain-Free Southern food and helping everyone she can along the way is her passion.

Melissa graduated from Georgia Southern University with a Bachelors in Exercise Science. She also has been personal training and teaching STOTT Pilates for over 10 years. 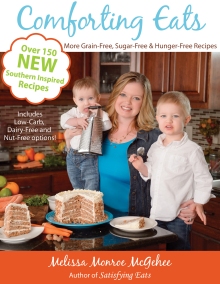