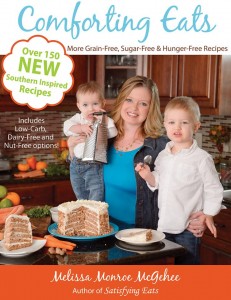 Grains and Real Sugar made me FAT! 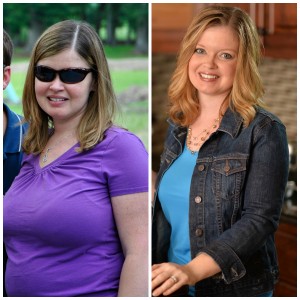 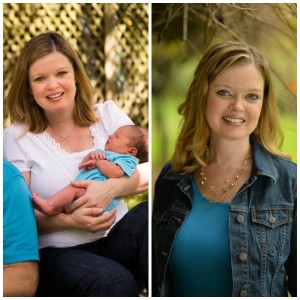 1 week after Connor was born and 9 months later 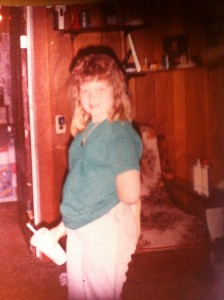 I have always had to watch my weight, and for years, I watched it steadily increase. As a child, I was very overweight (155 pounds in the 5th grade at 5′ 1”). I ate what every kid ate, Pop Tarts, Frosted Mini Wheats, lots of peanut butter and jelly sandwiches and lots of Kool Aid.  My mom really didn’t keep lots of junk food in the house and we rarely drank sodas. I was the fat child who was picked on at school, and told by friends of the family “you would be so pretty if you lost weight.” That was me.

In late middle school and early high school, I began to cut back on fats and fried foods and I became more active. Over 4 years, I lost 40 pounds and I gained needed self confidence.  In college, I put on a few (not quite 15), but quickly lost it through a “diet” of fat-free mayo, whole wheat bread and Splenda sweetened desserts.  In college, my dad suffered from a stroke at the age of 46 and died within the week.  It was a very tough time for me, he was such a wonderful man.  I had just declared my major in college, Kinesiology, and finished my degree at Georgia Southern University then moved to Louisiana to do my internship.  This is where my view on nutrition began to change.  I took a Nutrition Lifestyle Coaching Course and through the course material and my fellow colleagues, I learned so much life changing information about nutrition.  I was delivered from being Fat Phobic!  Then I started reducing the amount of sugar I used in baking and started using Stevia.  I would always bake desserts for people and “hide” stevia in them and they would never know! 😉  I also watched my below ground vegetable consumption, limiting my carbohydrates.  I had the hang of it and I was healthy and maintaining a good weight for me. Over the next few years, I tried to avoided wheat, especially in preparation for my wedding.  I was the happiest I had ever been and I felt I looked the best that I had ever looked.  Over the first year of marriage, life got busy and I didn’t watch my bread consumption as closely and my attitude toward wheat was, if I could avoid it, then I would but if that was the only choice, just eat it.  Well thinking like that put on 10 pounds in my first year of marriage.  No big deal, I just dealt with it, I just bought bigger clothes.

In October, 2010, I found out I was pregnant with our first child.  I was so excited.  I continued to eat healthy when I could, and continued to do Pilates. Then the migraines hit, and they hit HARD!  I was getting migraines every week for about 6 weeks and they lasted 2 days.  It was horrible.  I found myself picking up pizza on the way home because I thought it was making me feel better. In retrospect, it was probably making me feel worse.  Then as I began to eat more grains, then I wanted more grains.  It was a vicious cycle!  I developed horrible varicose veins in my right leg that bulged out, and the weight that I was packing on didn’t help.  When taking the glucose test, I was one point away from them making me take the 3 hour test, I begged for them not to order the test because I knew what the problem was, grains and sugars!! Two days before I had my son, I had gained 58 pounds!! Hunter arrived May 29, 2011.  It was a great delivery and recovery but life just got so busy that it took me months to get back to my low grain, low sugar lifestyle.  Looking at pictures, I actually think I put on weight after my son was born.  I started back teaching Pilates in August and I was so uncomfortable in my body.  I teach Pilates, I should have not gained so much weight and it should be coming off faster, right?   I was nursing and that didn’t seem to help.  So in September, I started cutting back on my carbs but still eating wheat thinking, it wasn’t a big deal.  The weight was slowly coming off so I was happy.

Then in October, I stumbled across a cardiologist’s blog and book, Wheat Belly.  Reading the book, reinforced the need to cut Wheat out of my diet 100%, and not only wheat, but other grains and sugars.  Day 1, no more low carb pitas which I was living on, the next day on the scale, 1 pound gone.  This was good.  Next day I got on scales after being wheat, grain and sugar-free, 2 pounds gone.  I normally do not weight myself that often but I was intrigued about what was happening. Day 3, another pound gone.  Day 4 another!  I was beside myself!!  Why had I not started this earlier.  So my lifestyle changed from that day!  Not only was the weight coming off, I wasn’t craving the sugars and breads that I had before.   All the while, I have enjoyed all of my favorite foods: eggs, bacon, steak, dark meat chicken, pork, spinach, asparagus, green beans, etc. and my favorite: chocolate, oh yes, I said chocolate!  Some times I eat chocolate every night for a week! It all made sense, reading about how wheat stimulates your appetite and that we were not designed to eat all of the grains that the Food Pyramid suggest.  I continued eliminating grains and sugars and the weight continued to fall off.  I stopped using wheat for, gluten-free baking mixes, sugar, honey, and replaced those foods with almond flour, coconut flour, stevia, coconut oil and bacon, lots of good bacon!   By the end of December, when my son was 7 months old, I had officially lost all of the 58 pounds!  Oh, happy day! 😉  I will never go back to the old way of eating or cooking again.  I have been so excited to make my favorite foods without the use of grains or sugars and have other people taste the food, and love it!  I have enjoyed blogging about my internet finds and my culinary creations! I hope I inspired you to start today on this new lifestyle that will change the rest of your life!

7 months after the birth of Hunter, December 2011

The day I went into labor with Connor, March 2013

A little over a year ago I made a life-changing decision. I went “against the grain” and stopped eating ALL grains, not just wheat. I am so glad I did. I have struggled with my weight since I was a child. Then after gaining 60 pounds during my first pregnancy, I was struggling to get the weight off, even while eating low-carb and being very active. I knew the dangers of “gluten” but never understood the impact of all grains. I stumbled upon Dr. William Davis’ book, Wheat Belly, and the rest is history! After a lifetime of struggling with my weight, low blood sugar and fatigue, I found that giving up all grains, not just wheat, and eating a lower-carb diet made all the difference. Now, I have no more headaches, no more fatigue and no more having to eat every two or three hours to keep up my energy. I also lost all of my “baby” weight plus one pound by the time my son was 7 months old! This is the first time in my life that I have felt in control of my weight and satisfied after eating. I will never go back to the old way of eating or cooking again.

I am currently pregnant with our second son and due in a few months. I am so thankful that during this pregnancy, I know to stay away from wheat, grains and other high-carb foods which had previously been my downfall. By this time during my first pregnancy, I was having horrible migraines lasting 36 hours at a time and was putting on weight very rapidly. So far during this pregnancy, I have gained less weight and I have had only one migraine (which was induced by wheat).

Just recently I started a food business, “Hunter’s Kitchen,” where I sell my foods at the local farmers’ market. It has been a huge success! Now, I am thrilled to put all of my favorite recipes in this cookbook for everyone to make for themselves! I have enjoyed blogging my culinary creations at www.satisfyingeats.com .  This cookbook is an extension of my blog and has been a lifetime in the making! In choosing this cookbook, I am so glad you have decided to improve your health and embark on the grain-free and sugar-free lifestyle! I hope the recipes contained in this cookbook make living without grains easy and that you don’t miss any of your old wheat and grain-laden foods!  Also be sure to check out my Facebook page for great articles and updates athttp://www.facebook.com/SatisfyingEats .”

For the second time in 2 years, my maternity clothes are all boxed up… I’m one happy mama! Technically I still have 5 lbs to loss but I ain’t sweating it! 😉 No counting calories, No skipping meals, No low-fat food, No working out everyday! I eat tasty foods that leave me full of energy. I eat chocolate almost everyday. I feel great… What more could a girl want?!?!

Finally my battle with weight, hunger and headaches is GONE! Eliminating grains seems like a daunting task but it’s not as hard as you think. The reward is great.  With all of the yummy recipes I have created, this lifestyle is SO easy!